SMARTPHONES ARE LEARNING TO TALK LIKE US. These little computers in our pockets are designed with malleable and evolving vocabulary tools that continually develop and adapt to suit our own unique lexicons (you might know it as ‘text prediction’). At times you may find yourself crafting your text messages around the suggested words your phone offers to you. Sometimes your phone will accurately predict the sentence to the point where you may not even have to think about or type the message at all. It’s a pretty neat feature sometimes, and it gets me a-thinking.

Through our phones, could we be gaining an insight into our moods, desires, and existential wallowings that we may otherwise overlook? Can our phones help us scrutinise our own psycholinguistics? Is the phone truly becoming an extension of ourselves? Am I just over-thinking a simple application?

Over the last couple of years, I have been enjoying some rather humorous, and at times poignant conversations with some chums of mine, using only the words my phone prompts me to use. Admittedly, I have control over the words I choose, but the phone thinks its way through the sentence and provides me with the word it thinks I should use based off my previous sentence structures, phrasing, and general vocabulary. So, there is a level of control handed over to the phone. I’m sure you all understand the way it works (especially Android users).

There are times where grammatical structure, syntax and common sense are shaky, but there are also times where messages possess what seems like an insightful gaze into what makes me tick, my concerns, what I’m excited about. You know, that whole I-stare-into-my-phone-and-my-phone-stares-back-into-me kind of thing.

Here are a couple of examples of the kind of messages I have come up with using only the ~10 words my phone suggests: 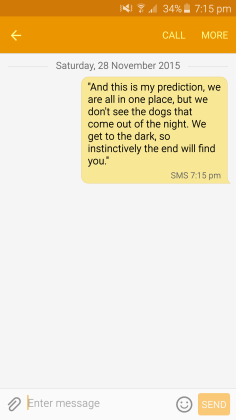 Right now I can hear you saying, “This is but a feature, your phone isn’t doing anything other than storing meaningless words into a database”. Perhaps that is true, if you look at the feature on face value.

Having access to another platform on which to express feelings of depression or anxiety might be a healthy thing, in an age where mental illness is so prevalent, but also so negatively stigmatised. Depression currently affects 1 in 16 Australian’s aged between 16-24 years of age, and a quarter of young Australian’s have struggled with a mental health issue within the past 12 months. Another damning reality is that males in this demographic often struggle to talk about their afflictions.

By engaging in and embracing your phone’s personal linguistic glossary, is it possible you could also eliminate some of the responsibility of ‘confessing’ your true feelings and emotions, thus reducing the negative stigma of such a purge? After all, it’s just a silly message, right? Maybe not.

When you take into account the leanings of Freud, or a variety of pro-psychoanalytic theorists, the concept of a Freudian slip (a lapsus) while speaking, scrawling, typing — or in this case tapping or sliding — is often explored. A lapsus is simply an involuntary mistake made while writing or speaking. But where psychoanalytic theory steps in is that it believes there to be an underlying meaning to these unconscious stuff-ups. Do our phones guide us in exploring and discovering these unconsciously juicy nuggets? This writer believes it to be a real possibility.

What’s nice to know is that there are some researchers out there with the goal of providing an effective therapeutic smartphone app. MoodMission is an app which aims to deliver cognitive behavioural therapy to its users. The researchers behind the application believe it could help people discover better ways of coping with mood swings and anxiety. Where it differs is that it is constantly undergoing randomised controlled testing to ensure its effectiveness.

There have also been many studies in the past few years surrounding the therapeutic potential of smartphones. A recent study from researchers across Sweden and the Netherlands looked at the potential of smartphone-based behavioral activation therapy for depression. Citing numerous similar studies of recent years, and the increased potential of non-face-to-face therapy, the researchers hypothesised that the increased usage of smartphones presents promising opportunities to extend the reach of psychological interventions into users’ everyday life.

The study group consisted of 12 individuals suffering from major depression according to the DSM-IV. The study involved an 8-week smartphone-based behavioural activation program with minimal therapist contact. The program was administered via a smartphone application and consisted of a short web-based psycho-educational text, and a step-by-step behaviour activation intervention.

The aim of the smartphone application was to make it easy for the participant to remember and register behaviours. Statistics and summaries of these registered behaviours were then presented to the participant through the app. Each participant’s impression of the app, and their thoughts on its efficacy were examined under certain criteria: Commitment (expectations, motivation); Treatment (Tool for help, positive experiences of treatment); Lack of Important Components (goals, closure).

Results showed that participants’ experiences were comparable with previous findings in similar experimental conditions (that is, treatment via smartphone). Participants found the smartphone-based treatment to be “more accessible” and “present in their everyday life”. One participant pointed to the possibility of smartphone-based treatment being more immediately motivating because of the reminders. Some individuals thought that the constant proximity of the smartphone created a sense of security.

Above all else, perhaps this study sheds even more light on the point of view that smartphones are becoming more and more a part of everyday necessity, not luxury. A heavy reliance on smartphones and tablets means we’re becoming increasingly attached to our devices, to the point where separation anxiety becomes a genuine problem.

Your smartphone might be more an extension of you than you care to admit. Maybe it’s a technological expansion of Broca’s or Wernicke’s area, or the amygdala or the hippocampus. Maybe it encompasses it all. The more time you spend with your phone, the more it understands your language, where you go, what you search, what you Like, or what you downvote. Specifically, it gobbles up, learns, adapts to and implements how you express yourself every time you send a message or an email and uses this for your future convenience. Your parents thought they knew you best, maybe Siri does.

You could learn a lot from these patchwork smartphone confessions. What I have found is that I am a strange, sometimes sad man who fears for his future. Did I know that already? Perhaps. Did my phone know it? It does now.