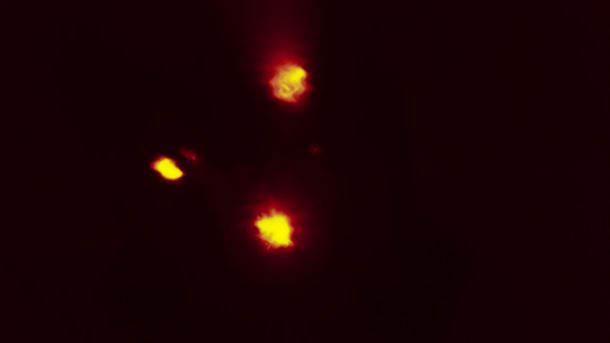 IN A FARAWAY SOLAR SYSTEM awash with distant, milky stars smearing through velvety blackness, an exoplanet modestly named HD 131399Ab is treated to a boastful triple sunset. This little piece of paradise is located roughly 320 light-years from Earth, in the HD 131399 system in the constellation of Centaurus.

Described as a gaseous, Jupiter-like planet, HD 131399Ab is a youthful 16 million years old, with a mass of 4 (± 1) MJ, or in English: 4 Jupiter masses. Take a coat, because this joint gets chilly –well, comparitively. The planet reaches temperatures of 577 °C (1,070 °F), making it one of the youngest, coldest and least massive exoplanets to be directly-imaged up to this point (of which there have been very few).

Its orbit takes a whopping 550 Earth-years, wherein the exotic planet orbits the central star HD 131399A, which is itself orbited by the less massive stars HD 131399B and HD 131399C. The central star is estimated to be 80 percent more massive than our very own Sun.

For a quarter of this orbit, the exoplanet is treated to a triple-delight, where all three suns are visible during a single day. During this period, the entire surface of the infant planet is perpetually drenched in sunlight, as the single sun sets, the binary pair rises.

“For about half of the planet’s orbit…three stars are visible in the sky; the fainter two are always much closer together, and change in apparent separation from the brightest star throughout the year,” said Kevin Wagner, the lead author of a research paper titled Direct imaging discovery of a Jovian exoplanet within a triple-star system.

The exoplanet’s orbit around the central star is by far the widest known within a multi-star system. What makes the discovery even more peculiar is that such wide orbits are often found to be considerably unstable.

As stated on the European Southern Observatory website (the organisation behind the discovery):

“Such orbits are often unstable, because of the complex and changing gravitational attraction from the other two stars in the system, and planets in stable orbits were thought to be very unlikely.” 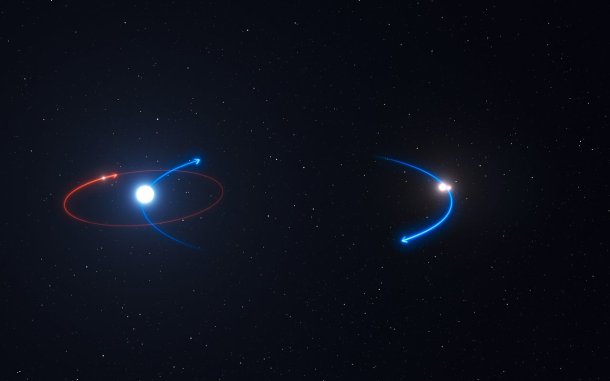 A graphic representing the orbits of the exoplanet and suns in the HD 131399 system. Source: European Southern Observatory

Using the SPHERE imager, which is an instrument capable of detecting and correcting for specific atmospheric disturbances, Wagner and co. discovered the exoplanet’s atmosphere contained both water and methane. However, due to the fact it is a gaseous planet, researchers are of the opinion it is highly unlikely HD 131399Ab harbours any life.

“It has quite high temperatures, no liquid water, extremely powerful winds, and no surface; just below the uppermost layer of the atmosphere it rains liquid iron droplets,” said Wagner.

So you better pack some drinking water, a coat, a kite, and an umbrella.

Scientists at the European Southern Observatory (ESO) used a very large telescope, more specifically the Very Large Telescope. The VLT is more of a facility than an object, and operates at visible and infrared wavelengths. The VLT consists of four individual telescopes, which are most often used singularly but can be combined to achieve higher angular resolution. The telescope is able to detect objects roughly four-billion times fainter than what can be detected by the human eye. In other words: it’s possible this thing can still see the glimmer of hope in my eye when I look myself in the mirror.

An aerial view of the four Unit Telescopes that comprise the Very Large Telescope. Source: Wikipedia

By combining the SPHERE imager with the VLT, Kevin Wagner and his buddies were able to obtain a direct image of the exoplanet. SPHERE stands for Spectro-Polarimetric High-Contrast Exoplanet Research Instrument and it is strapped onto the VLT. This bad-boy is sensitive to infrared light, making it capable of detecting the heat signatures of young planets, among other things. 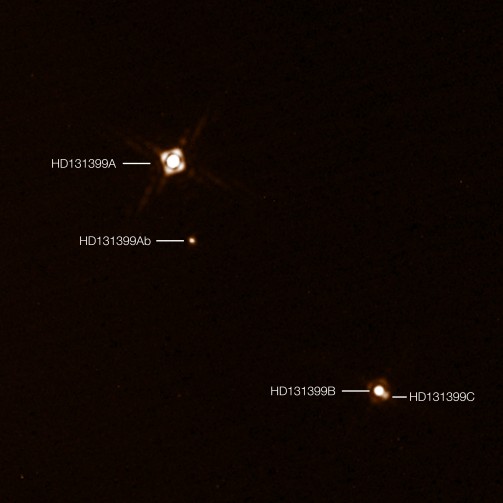 A composite image showing the exoplanet HD 131399Ab in the triple-star system.

The resulting image (seen above) was created from two separate SPHERE observations: one to image the three stars and one to detect the faint planet, and is one of the very first direct images of an exoplanet. Even more exciting is the fact that HD 131399Ab is the first exoplanet to be discovered using the SPHERE imager, meaning we could be in for some wonderful discoveries in the future. Maybe an exoplanet 4 million times the size of our sun, with 15 suns! Oh, to dream.

The VLT is capable of lots of things, and is regarded as the most productive ground-based facility for astronomy. Heck, outside of its use in observing a direct image of an exoplanet, the VLT has been used to track individual stars moving around the supermassive black hole at the centre of the Milky Way, as well as to observe the afterglow of the furthest known gamma-ray burst.

An artist’s impression of the orbit of HD 131399Ab in the trinary star-system.

Note: The commonality of multi-star systems

“What we do know is that planets in multi-star systems have been studied far less often, but are potentially just as numerous as planets in single-star systems,” said Wagner.

Speaking of interplanetary adventures, find out what’s on board NASA’s Juno.